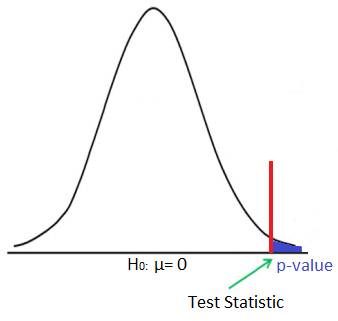 The p-value is a quantitative value that allows us to determine whether a null hypothesis (or claimed hypothesis) is true.

Determining the p-value allows us to determine whether we should reject or not reject a claimed hypothesis.

We set the significance level, which serves as the cutoff level, for whether a hypothesis should be rejected or not. This cutoff point is also called the alpha level (α).

If the p-value is less than α, then this represents a statistically significant p-value. This means that we can reject the claimed hypothesis.

If the p-value is greater than or equal to α, we cannot reject the claimed hypothesis.

To calculate the p-value, this calculator needs 4 pieces of data: the test statistic, the sample size, the hypothesis testing type (left tail, right tail, or two-tail), and the significance level (α).

When you're working with data, the numbers of the data itself is not very meaningful, because it's not standardized. You can obtain a whole bunch of data points for a given scenario, but you have to extract meaningful things from it. This is where the test statistic plays an important role.

So the test statistic is very important because it gives us a standardized measure that shows how far or close actual results are from claimed data.

If the sample is greater than 30 (n>30), we consider this a large sample size. When the sample size is large, we use the Z-distribution to calculate the p-value.

This is why the sample size is very important. It determines whether we need to use the t-distribution or the Z-distribution

So the significance level represents the cut-off point that we choose and determines with what level of confidence we can accept results.

Let's go through a few examples on calculating the p-value.

Suppose that a company claims that the null hypothesis that the average dollar amount that customers spend per transaction is $32 (H0: μ = 32). However, you believe that the average is much less than this (Ha: μ < 32). You calculate that the test statistic is -2.5 based on a sample size of 100 (n= 100). What is the p-value?

The first thing is that this is left-tail hypothesis testing. Because the sample size is greater than 30, it is considered a large sample size. Therefore, we look up the p-value on the Z-distribution table. The test statistic is already given. Looking this up on the chart, you get a p-value of .0062 or .62%.

Another Example: Suppose a company states that they receive, on average, 4 customer complaints a year (μ = 4). However, you had a few terrible experiences with them and believe the actual amount is much greater (μ > 4). Let's say you locate 10 customers (n=10) to find out their experience and obtain a test statistic of 1.96. What is the p-value?

So this is right-tail hypothesis testing. The sample size is 10, so we are going to look up the p-value based on the T-distribution table. Calculating the degrees of freedom, df= 10 - 1= 9. This gives us a p-value of .95. However, since this is right-tail hypothesis testing, to calculate the actual p-value, we must take 1 and subtract this from .95, which gives us a value of .025.

Another Example: Suppose a company states that they receive 200 orders a day but you believe this number is not correct (Ha: μ ≠ 200). You obtain a test statistic of 0.5 based on a sample size of 400. What is the p-value?

A point to know is that p-values are probabilities; therefore, they must be between 0 and 1. A p-value greater than 1 or less than 0 represents an erroneous result.

Area Under the Curve Calculator

Slope and y-intercept of a Regression Line Calculator

Margin of Error for the Sample Mean Calculator